Little over two weeks ago the best half iron-distance athletes, and me, were gathered to Zell am See, Austria to fight for the world champion title. The lineup in the pro field glimmered like the stars in the clear night sky over the Alps as all the Kienles, Gomezes, Frodenos, Ryfs etc. could be spotted strolling the streets of the small village before the race. The tough course and the sizzling hot summer weather promised a hard but an honest race. 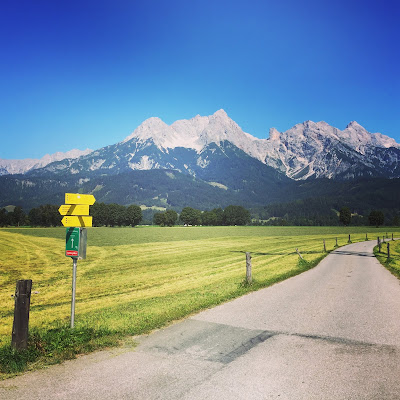 I arrived to Zell am See late Friday afternoon and the village had already gone through the transformation similar to that what Kailua Kona will experience one month from now. Bike bling everywhere you turn your head to and athletes running, swimming, riding, stretching and jumping all around. As every guy looked to be even fitter than the other, I tell you, it was oh so easy to fall into the pitfall of starting to doubt yourself and your training before you’ve even found a parking place for your car. The situation wasn’t made any easier by the age group podium expectations laid on my shoulders by chairman Haahtela from SKB Racing Triathlon Team, the club I recently joined.
To get rid of the sluggish feeling after 10 hours of traveling, I jumped into the lake Zell for a short swim without the wetsuit as the air temperature was soaring nearly 35 centigrade. At least near the shores the crystal clear water was comfortably warm and I was glad that I had packed the Sailfish Rebel swimskin in addition to the G-Range. Later in the race briefing, however, I found out that it was going to be a wetsuit swim after all. This of course being good news for me because despite my, and even more so, my swimming coaches best efforts I still wasn’t swimming like Frodeno. 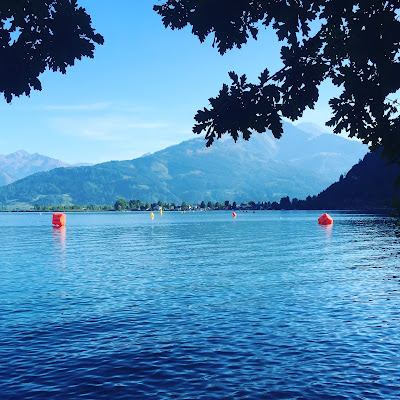 The race day dawned as beautiful as the preceding couple of days. The lake mirrored the clear blue sky where the sun had already climbed high since the starts were late in the forenoon, conveniently timing the run portion of the race during the hottest hours of the day. But hey, it’s the World Championships; it’s supposed to be hard.
And hard it was! 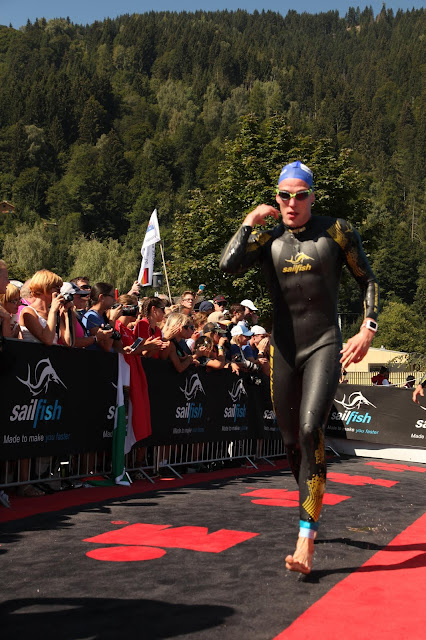 I managed the swim in a reasonable, but not great, time of 29 minutes and without too much of a wrestle since the starts were divided in age groups. After clearing the T1 I jumped on my beautiful Felt and started to reel in the swimmers. Damn, was there anybody behind me in the water?
Before the race I had done calculations with Best Bike Split which indicated I should be able to reach the crest of the monster climb ahead in about 1h09min which was time wise at nearly halfway. My predicted total bike split was 2h25min, which on this course with nearly 900m of elevation gain required pretty much all I had.
But that was just what I was here for, to give it my all. I might have been a little apprehensive about my chances for a high placing but I wanted to lay it all out on the course. You cannot buy the feeling you get when you absolutely could not have given any more. That’s the reason we do this sport! 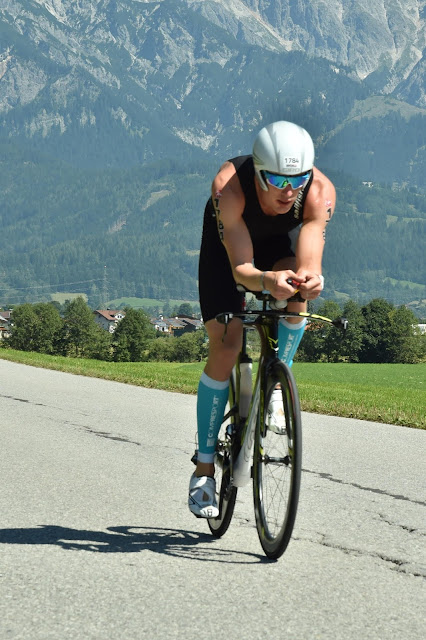 “This climb is not so good for you big guys, eh?” shouted a stick man on wheels spinning easily by me up the increasing gradient. Trying to quickly think of some smart reply I managed to drop from the shoulder of the road to the dirt and nearly over the fence down a three-meter cliff. “This is not mountain biking!” shouted the next skinny guy passing me. Why you little! I muttered in my head and steered back to the road.
After spending forever in the granny gear (36-28), which I’m really, really happy I installed on the Felt for this race I was about to finally crest the mountain. I checked my Garmin and saw I was actually 1,5 minutes ahead of schedule. Yes!
Now it was time to hit the notoriously technical first part of the descent. Luckily this bike has awesome brakes and they got plenty of use too. After the hairpin section the road straightened and the Felt’s aero abilities combined with my 80kg body mass saw me speeding 75km/h and pass some of the climbers. I bet the views down the mountain were great too. All I saw, though, was a tunnel of trees. Down the valley a pack started to form and for a while I took my share in the front. But as we reeled in more riders the going got really nervous and the race marshal who had been riding alongside started to reach for her whistle in a manner that I decided to pull back and steer clear of any drafting infringements. A short while later a few cards were shown to some guys mid pack and quite justifiably.
On the last 20km section, while accelerating out of a corner, straight out of the blue, my left hamstring cramped badly. I had to coast for about a minute before I got it stretched out. I got dropped from the bike group, which, by the time, must have had about twenty riders. The rest of the ride I rode really easy in order to give the legs a little rest before I would blast through the field on the run course. My total bike split ended up being 2:26, pretty bang on with the predicted time!
The first five kilometers on the run were really difficult for me. I was right on the edge of cramping again. The kilometer splits were uncharacteristically slow despite the flat and fast course. In hindsight, I’ve cramped in a lot of my recent races. In a way, it’s good to now I have been on my limit, but in light of current knowledge about cramping, it might be that I’m just not training hard enough. Yeah right, what do those scientists know anyway!? 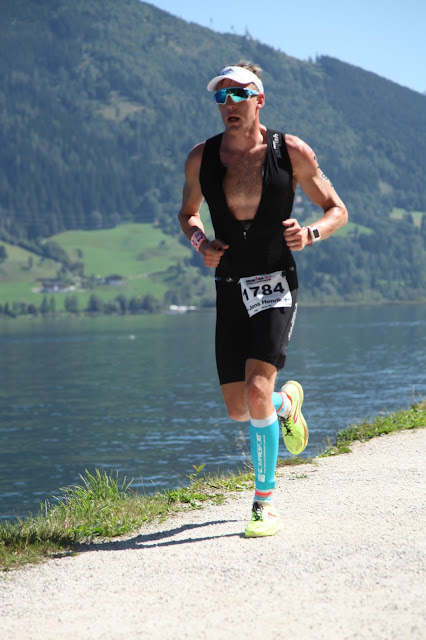 A little by little as kilometers passed, I started to pick up some speed and managed to even pass the visibly struggling Jesse Thomas on his last lap. Nearing the last turnaround I tried to see which athletes had two armbands indicating they would be on the same, final, lap with me. I spotted a few guys and thought of my goal of giving it my all. I was really hurting and felt the cramps coming again but pushed on. On the last couple hundred meters I started to sprint and finally shoot past the guys ahead of me. I managed to hold them behind and on the verge of a full body cramp I reached the finish line, almost too tired to lift my hands for celebration. 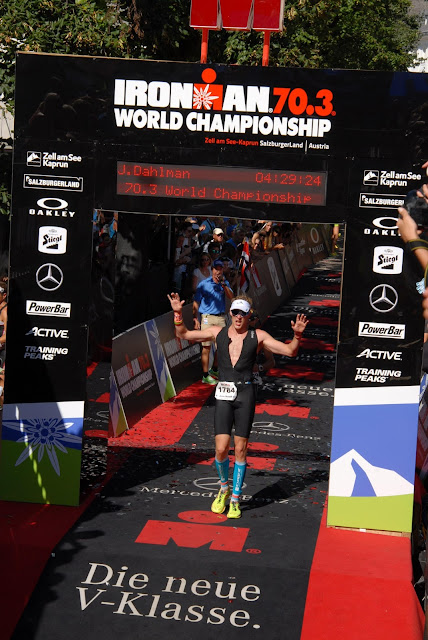 I am really happy about my mental performance on the day and despite not being able to run at my normal level I was the 13th fastest athlete in the age group of M35-39, less than 5 minutes 30 seconds behind the division’s world champion. Great race! 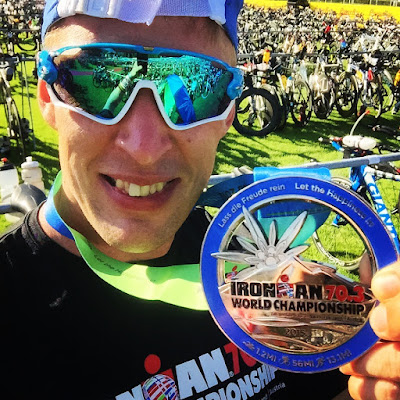